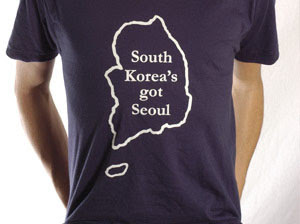 Tis my first trip to Korea and its finally going to happen I have an agenda written down on my trip there. Main reason is we are going to be touring OJSYS.NET `s plant down in jeju or wherever that is and then check out Samsung. What I do know is it`s just going to be one day. But I`m heck as curious to know WHY, there are bazillions of koreans who choose to invade our lovely PHI and WHY our lovely PHILLIES like to go there. It just boggles me that sometimes hanging around places where there are groups of koreans becomes interesting.

The american financial world is a multi gazillion money guzzle that has many opportunities. I realized that money is not just about greed over there, It is just a result of how they view life and human progression THAT CLEARLY is not present in the filipino idle mindset. It makes the money the fruit of their hustle in the guzzle.Not putting down my fellas but hey...so much for the complacent way of living I mean, as I have observed, after going through some interviews with different types of individuals here, man, its just in complete contrast. Dont get me wrong, I have not interviewed a lot, but as per observation, there are just a few facts that bothered me, the way some poeple treat employment as a means to an end...only; the way some poeple thinking that going up the ladder in ranks is an ultimate achievement..never realizing that everything is just LATERAL; They do not want making phonecalls...HUH? the worlds problems are solved in the telephone and that therefore when the job calls TO CALL yor firm is a call center; and lastly BOXED PERCEPTIONS that make our nation limited. Do you know the ratio of people in my encounters that are GOOD vs the LAME is 5 out of 100, only five who are HUMBLE enough to accept the fact that the reason that they are still employed and bored is because they did not have the best shots in the world because they have not yet made anything happen. There are a lot of Proud nothings in this nation, my ex boyfriend is one, that need a head change. They took dying proud in the most unintellectual form..dying proud of hunger is a mockery of real honest to goodness happiness and fullfilment that a proud person think he has. Thats being a fool you all, as they say, keep your head up but not your brains out..please

And whats sad is, the minority is a result (cell) of a collective. And if a collective of individuals are a rot and dying cancer tissue, the system is at a fault. What operates in the system that makes this nation sick? And beyond that operation, were there measures or the are the measures bound to the disease? Do we just rant THIS NATION IS SICK!SICK!SICK! or do we say THIS NATION IS GETTING SICKER HOW DO I STOP THE CHAIN? And it all stops in us, if we vote in a different perspective, if we think in a different light, if we act getting past beyond ourselves, we will get somewhere. We`ll breathe a better air. I guess that answers tha question why KOREANS invade the PHILLY and the PHILIES go to KOREA. They are just plain sick nof it. And thats one bad thing on itself you see, because another trait which is THE RUNNING AWAY comes to play. I have yet to get to know why they even do it, but I dont think that money is the issue, because thats a lazy bone excuse. THERE IS A LOT OF MONEY HERE. Why on earth would you think foreigners exploit the goodness of this country and bring in dollars and who in the economy? Because they see an opportunity. Its all about seeing an opportunity, irregardless where that opportunity is. If you want opportunity you got to look at THE FINANCIAL MARKETS where the money ends and leaves. Thats one option. There are a lot of things.
Posted by Remy at 4:03 PM No comments: Links to this post

DANIEL AND THE LIONS DEN 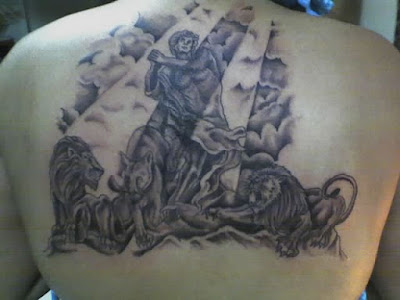 Tis the first tattoo of my life. Dang its big and detailed. This tattoo has a story.

It is God, defined that I have one, he took me out of the pressing things in life. He snatched me out of trouble so many times. Its all about Psalm 27:5. L.ook it up if you want.

The needled used here were 7 for the dark shades and outline and 3 needles for the light details, after 8 grueling hrs of tattoo with GOT INK`s main man Julius Bello. It still has a manuscript in the shoulder blade. We`ll just finish it up before we go to korea.

Our korean trip will be in Oct 17 12:00 AM. We are heading to Seoul to visit a client`s plant. We will be spending the last five days with work and some R&R and that would be some shopping for me, should there be decent cheap stores that I can buy stuff from.