YOU PUSHED HER TOWARDS HER DEATH

She was running as fast as she could
While no one was holding her down
Then someone came along to lift her up
You kept grabbing her by the arm
Your words are like daggers
Pinning her on the ground while she wanted to fly
She tried to escape so she can no longer be raped
By your abusive rants and cries
She kept changing her life so her future can be so bright
But the atmosphere of your existence was savage
And energy so negative
That she cannot see the light
Now she is drowning alone
Catching her life in deep breath
Her body now wretched and tired
That you pushed her towards her death.
Posted by Remy at 6:19 PM No comments: Links to this post

Why do I sing the songs that I sing? Why do I make the songs I make?

Why do I sing the songs that I sing? Why do I make the songs I make?

I kept thinking about that after my Jam session in Kooky Tuasons' show where in I was a guest along with 2 lifestyle geniuses.

I was asked by  AA Patawaran, Manila Bulletin's Lifestyle editor something to the effect of why do I make my songs. Afraid to explain a fair bit and call too much attention to myself, I resorted to explaining it in bits that would be interesting so I can avoid going down the path of dragging listeners to boredom.It was a funny version of the whole explanation as to why. It bothered me that I did not express my truth fully because I was afraid to draw too much attention to the place in my soul I secretly call my own.

Link to the 4 hour show here:

The fact is , that is a question that I am asked often. Kevin Roy asked me that in our joint gig in paranaque, Kuya Nitoy Adriano also asked me this as well, along with other musicians I worked with and I respond as funny as I can to be likeable.

I make songs to express my truth. I project an outgoing and extroverted persona to be liked in the superficial world but deep down inside I cry about questions that are unanswered in my life and what I go through. Do not bother handing me a joint because I will leave you down to my world of being happy rolling alone and that's just who I truly am.

So going back to unanswered questions, It tires me rolling these questions in my head , scenarios and things I think to be true about my life that no one I know shares with me. My songs are my anchor to feel. I tune out my feelings when I deal with the world as I have to be or need to be or need to act for someone else to be able to survive. I always seek solace through my songs to remind my self of positive and negative feelings that I went through to stay real and grounded. It is my ultimate dream and happiness to have people help me color my music with life as they are all raw and dead down in my soundcloud. I want to make my song known for me to know if there are other people who think like me so I can gain a friend who understands me. I guess it is the same as how I deal with my life, my compositions are like a cry for help a cryptic suicide note waiting to be read and realized. It is both deep and dark at the same time that only I and my feelings can understand. At the end of the day these songs are what I am passionate about in my life. I have invested my travel times, holidays being locked up for days, idle time in bus rides, money and garage band studio time composing bits and pieces of my thoughts and feelings.

How do I clasify my genre?

Now that I think about it, I wanted to pretty much be triphop but it is turning out to be more in the side of sad core. These songs are more of my gut reserve , it depends on how you look at it, some people would call it dark and heavy some would be dizzy and confused while some will treat it as art, dark art. We all have some type of darkness in our life this is my ugly showing out in the world.In my songs i do not care if i use a different note or key from the rhythm of the music to the song I sing. In my songs I feel free to defy. My songs are not your standard and my competion level singing voice is not at play, some tunes off key but that is just me being free.

If we think and feel alike and you feel as though you feel me then give it a listen here:

Posted by Remy at 5:50 AM No comments: Links to this post

I won the Mom game through "YouTube Baby Syndrome"

Taluli is now 4 and is in the age when he is super curious and super enjoying pretend play and that the only way to get him to pay attention is through relatable mediums like his favorite YouTube, Sci Fi and Supernatural. 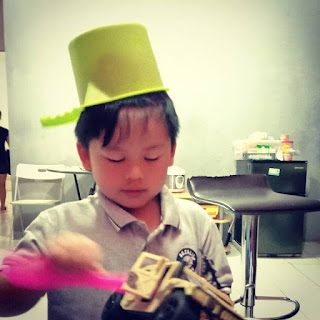 Every parent wants to manage a kid these days and part of this is giving them gadgets where they can play and watch YouTube, I know it is the worst thing you can do to a kid but because these kids are naturally seeking stimulus relating to anything that is in YouTube when a parent is absent and busy hence making YouTube an ally to these toddlers.

But when is enough, enough? I have noticed that Taluli started to sound like a YouTuber and would talk about anything that is in YouTube and adapt mannerisms, and expressions as exaggerated as a YouTuber would sound,  like a total disconnect to reality. That is when I already had to draw the line and think of ways on how to not necessary keep him off of the Tube, but limit his exposure to it.

Taluli responds to stories within YouTube so I showed him a video of a kid that is weird and loud and a kid that was convulsing. When asked why these kids were acting that way I told him that," Honey, they watched too much YouTube and now they are suffering what is called the YOUTUBE BABY SYNDROME."

To give you a backgrounder, Taluli grew up a deep self thinker, he never listens not unless his validation process concludes that some one is right. He relies on his instincts so much that as a child, he only trusts his beliefs based on his experience and insights and I keep that a sacred trait which I pray never fades away. So true to form, as soon as I gave him the "YouTube Baby Syndrome" it had to take him a few hours to be able to believe that it exist and that it is  and knew that he already  accepted the fact once he started telling people that they had "YouTube Baby Syndrome" in his conversations.

So according to Taluli and how he understand what I meant, "YouTube Baby Syndrome" starts when you start talking and being an exaggerated YouTuber and that you have to be careful not to go to a point where your eyes roll and you start to shake. So since then, he was very mindful of his watch hours and reminds people not to watch YouTube too much so they won't have "YouTube Baby Syndrome". I won the Mom battle against YouTube.

This my friend is a cause to celebrate with a glass of Red Wine. Single Mom Wins.

Posted by Remy at 6:27 AM No comments: Links to this post